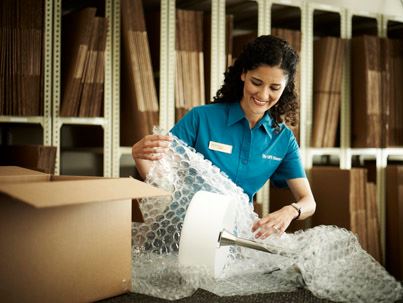 Bubble Wrap was created by two engineers, Marc Chavannes and Alfred Fielding, in 1957. Like many innovations, it was accidental. The story begins in a garage in Hawthrone, NJ where two engineers were trying to make a plastic wallpaper with a paper backing. Surprisingly, this product did not take off but they quickly realized that their invention could be used as a cushioning material for packaging. And, later pair founded Sealed Air Corporation in 1960.

The manufacturing process of bubble wraps

1. Bubble Wrap starts as polyethylene (plastic) resin, in the form of beads about the size of pea gravel.

2. The beads go into an extruder – a long cylinder with a screw inside that runs its entire length.

3. The barrel that the screw rotates in is heated by heater bands to approximately 180 degrees prior to the screw turning to melt the material. The heat builds up with added heat from the friction of the screw movement and the resin melts into a liquid that is squeezed out of the cylinder into two stacked sheets of clear plastic film.

4. One layer of the film is wrapped around a drum with holes punched in it, and suction is applied drawing one web of film into the holes that form the bubbles.

5. The second layer of film is then laminated over the first so that when the two films are joined, they stick together and trap the air in the bubbles.

6. This may sound easy, but polyethylene is a porous material like a sponge. Air can easily leak out through the pores, which tends to limit the cushioning ability of the packaging. Realizing this, some manufacturing companies such as Sealed Air started using a Saran coating to seal the air in the bubbles. Eventually, a method of encapsulating an air retention barrier in the polyethylene during the extrusion process was developed.